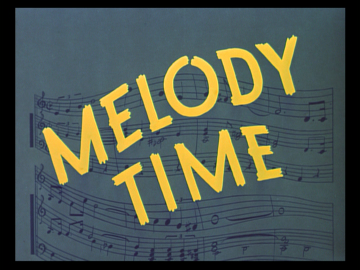 Melody Time continues the now familiar format of a package movie for Disney in this period.  While there’s other shorts in the film, and in particular a fairly long Pecos Bill short, I’m just going to touch on three of them.  Once Upon a Wintertime, Johnny Appleseed, and Little Toot.  Each of these short stories provide a stripped-down example of themes seen in many other stories.

The Once Upon a Wintertime short provides a simple romantic narrative.  We have a man and a woman on a winter skating date.  The opening romantic song makes the relationship between the mute couple clear.  Since they begin together, they need to be separated to create some conflict.  In this case, the man upsets the woman by showing off while skating by jumping over some logs, inadvertently spraying her with ice when he skids to a stop.  She walks away annoyed, though does give a backwards glance, but the man is upset as well now and ignores her, so she continues away.  The tension suddenly builds as a sign is uncovered revealing she’s headed for thin ice.  The tension increases again as the ice breaks, and the woman starts floating downriver.  The man fails to save her, and it ends up being the horses, birds, and squirrels that had been tagging along to save the girl just before she goes over a waterfall.  Saved from certain death, they are reunited, their brief conflict forgotten.  This is a common romantic setup in stories; boy and girl split up, girls gets into trouble, man saves her, and everything is fine again.  This bit of mini-drama is often slipped into the romantic sub-plot of a larger story, rather than standing alone.

The Johnny Appleseed story has many of the elements of the hero’s journey in it.  It starts with the call to adventure, which happens when Johnny sees settlers headed west.  This leads into the next element of the hero’s journey where they initial refuse the call.  Johnny gives the excuse that he’s weak and doesn’t have any of the right gear for it.  This leads into the mentor and supernatural aid when his guardian angel shows up and convinces him that he’s ready enough.  Johnny then heads into the wilderness to begin planting apple trees.  Another element of the hero’s journey comes near the end with the Apotheosis, in this case a physical death from which he transcends from planting apple trees on earth to planting them in Heaven.   This leaves out a lot of other steps, but not all steps are necessary and it is a short story.

The Little Toot story can be summed up as a basic redemption story, where the disobedient Little Toot gets into the trouble and is banished, but finds redemption by saving another ship in a storm.  Little Toot is initially shown to be a mischievous troublemaker, but then tries to go straight after having a close call with a police boat.  Unfortunately, his attempt to help his dad ends up just making his biggest mess yet.  This helps generate symphony for the character.  He is able to be banished to move the story along, but the audience also continues to root for him because we know his intentions were good. When he finally finds redemption there’s a brief moment of sacrifice where Little Toot gets totally submerged, creating a metaphorical rebirth to indicate how much he’s changed.  It also helps create a small amount of tension, especially for younger viewers.   The redemption story is a powerful one, and has been a constant theme in stories for as long as there have been stories.

These simple stories present the seeds that can grow into much larger and more elaborate tales.  Keep them in mind when writing.  These are all themes that can be mixed together in many different ways to tell numerous different stories.
Posted by Unknown at 10:46 PM