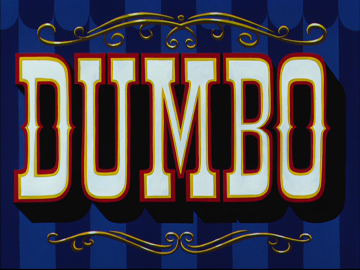 Dumbo was released in 1941 and intentionally made with an eye toward keeping costs down to help recoup the losses on the commercially unsuccessful Fantasia.   As such the animation is noticeably less elaborate than Disney’s earlier feature films.  It is also one of Disney’s shortest animated films, barely over an hour long.  Despite that, the story is simple enough that it does not feel rushed, and has plenty of room for songs and gags.


One aspect I find interesting to examine is Dumbo’s motivation.   At first glance you might think his goal is to fly, or not be ridiculed by others for the size of his ears.  But his real motivation is to be reunited with his mother.  Throughout the film Dumbo is depicted as being a baby, and as such, has very simple desires and understanding of what’s going on.  It begins with him being delivered by stork to his mother in the circus, and quickly establishes his large ears, and the other elephant’s low opinion of those ears.  While his mother is outraged, Dumbo’s reaction shows that he doesn’t really understand he’s being made fun of.  Dumbo’s only real concern is being with his mother at this point. Even when the crowd laughs and mocks him, he seems to simply enjoy the laughter he gets from them from wiggling his large ears.

Dumbo’s mother reacts, protectively hiding her son behind herself.  When a particularly annoying boy goes too far, grabbing Dumbo and pulling him out, she reacts violently, grabbing and spanking him with her trunk.  When the circus hands intervene to stop her and pull Dumbo away she only gets madder, her eyes going red as she fights the handlers off.  But she is eventually subdued and locked away as a mad elephant.

This is where Dumbo’s story really begins; now he has the goal of returning to his mother.  It is only now, a third of the way into the film that we meet the other major character, Timothy the mouse.  Timothy is immediately made more sympathetic, and the other elephants less so, as he watches them turn their backs on the lonely Dumbo.  Timothy quickly befriends Dumbo, and hatches a plan to help him by making him famous.


I feel like this is a weakness in the story, as Timothy’s goal is more aligned with helping Dumbo to be accepted, big ears and all.  But this has little connection to Dumbo’s goal of reuniting with his mother.  He simply seems too young to do much besides go along with Timothy’s plan, as he has nobody else looking out for him.

Timothy’s first attempt at making Dumbo famous is a disaster.   This further alienates Dumbo and gets him demoted to working with the clowns. This turn of events is fairly standard for the second act, stacking the odds against the protagonist and making their general situation worse.  And while he is successful as a clown, he is clearly not happy with the situation.  This is especially clear when Timothy tries to cheer Dumbo up, by telling him how successful his is now.  He immediately cheers up when they go to visit his mother though, further highlighting that his real goal is to be reunited with his mother.


This leads into the bizarre Pink Elephants on Parade musical number when Dumbo and Timothy accidentally get drunk.   Despite the oddness of the sequence, the drunken haze serves an important purpose the following morning, when they wake up in a tree and realize Dumbo can fly with his ears.  But fist Dumbo still has to learn how to do it when not drunk out of his mind.   Help comes from an unlikely source.  The crows, who initially ridiculed the idea that Dumbo could fly, have a change of heart after Timothy gives them and impassioned scolding.  In aid the lead crow provides a “magic” feather, a classic placebo to give Dumbo the confidence to fly.

They plan to reveal Dumbo’s flying ability the next time he does his trick, but quickly run into the other classic aspect of the placebo item when Dumbo loses it and has to be convinced mid-fall that he doesn’t need the feather to fly.  This helps add a bit of tension and drama to what would otherwise be a fairly tepid climax to the film.

Once Dumbo starts flying around, the movie wraps up very quickly with a quick montage of newspaper headlines and a final shot of Dumbo flying along behind the train to meet his now free mother.  Who apparently was freed because her son is famous.  So it turns out that Dumbo gets to be reunited with his mother, though it took a rather roundabout trip to get there.


The film Dumbo presents an interesting story structure, where the themes most front and center in the narrative, don’t necessarily match up with the goals of the protagonist.  But the themes of Dumbo about self-acceptance and acceptance of others are still strong ones, and remains an excellent parable for those reasons.
Posted by Unknown at 10:18 PM