I’ve come to the conclusion I’m just not a fan of big monster movies.  I never really watched them growing up, I was pretty meh about Pacific Rim, and ultimately I felt pretty meh about this latest Godzilla reboot.

That’s not to say Godzilla is bad.  It’s just not for me.  I got the feeling it was a pretty good rendition of a classic Godzilla movie.  It’s better than the previous remake at least.  Much more tied to its roots.  At least I think so.  Like I said I never really watched the old movies.

For me the movie felt very slow.  And there were some lacks of logic near the end.  They really didn’t sell me on the fact that he couldn’t get the bomb casing open.  He had a harpoon and he didn’t even try to use it level it open, or smash the glass in front of it.  Plus, an absurd amount of stuff happens in the time from when the countdown on the bomb is started and they find the bomb.  There was some severe time dilation I had a hard time swallowing.   But you can poke holes in any movie.  So I’m not going to sit here and do that.  I’ll just have to say.  If you liked the classic Godzilla movies, you’ll probably like this.  If you didn’t, this one probably won’t change your mind.
Posted by Unknown at 10:17 PM No comments:

Email ThisBlogThis!Share to TwitterShare to FacebookShare to Pinterest
Labels: wirt 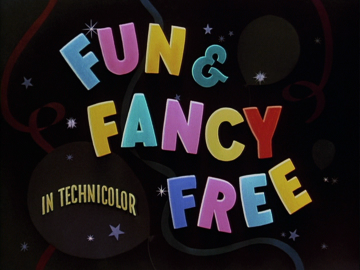 Continuing the anthology movies of the ‘40s, Fun and Fancy Free takes a slightly different approach by limiting the anthology to two longer shorts with a framing device featuring Jiminy Cricket.  The first short, the story of Bongo the circus bear is interesting to examine as it has the same skeleton of numerous romantic stories.  The second story, a take on Jack and the Beanstalk with Mickey, Donald and Goofy, demonstrates some interesting shortcuts for characterization.

The first short is framed as an audio story narrated on a record.  It is the story of Bongo, a circus bear who escapes to the woods.  The beginning of the short plays out very straightforward.  On the stage he’s the star of the show, but off the stage he’s poorly treated by the circus master.   He longs to escape the drudgery of performing show after show and eventually gets his chance.  Throughout the short the antagonist changes several times. First it is the circus master, but then it shifts to nature itself as Bongo has difficulty initially getting used to life in the woods.  Finally it shifts to a rival for the affections of a cute lady bear he meets.  The romantic subplot of this piece is prototypical of many romantic plots in movies and TV shows.  It goes something like this:

In this case the misunderstanding is caused by the cultural difference between Bongo and the forest bears.  In the forest it turns out these bears slap each other as a show of affection.  One of many things I doubt these early shorts could get away with today.  But, there is still the issue of the rivalj, but Bongo also overcomes him.

As the Bongo story wraps up the film shifts back to Jiminy Cricket as he moves the viewer from that story to the next one.  In this case, that involves visiting a small party next door, which consists of a boy and girl, and a ventriloquist with two dummies.  The next story is told by the ventriloquist, with the children or his dummies occasionally chiming in with their own thoughts.

The story itself is a retelling of Jack and the Beanstalk, but with Mickey in the starring role, along with Donald and Goofy along for the ride.   Since it uses characters that are already known, there isn’t a lot of focus on developing them.  It’s more just the established personalities bouncing off each other.  This works well for a short, where there’s not a lot of time for character development anyway, but would fall flat in something longer, since it would really limit the viewer’s connection to the characters.

Indeed, there’s not much of a character arc at all.  While there is still the trading of the cow for magic beans, there’s never any lesson implied in it.  They never come back to it in either a positive or negative way.  It’s just something that moves the story forward.

The story overall is not about the characters, but the action going on.  While we see Mickey, Donald and Goofy are hungry at the beginning that still does every little to drive their actions beyond selling the cow.  Throughout the story, the characters are reacting more than they’re acting.  There’s never even a choice about going up the beanstalk or not, it happens to them while they sleep.  They do decide to go to the castle, but not for any particular reason than curiosity.

Once in the castle, the drive of hunger does come again briefly, as they rush up to eat the food from the giant’s table.  But then the giant is introduce, conveniently singing about his powers, acting as a quick introduction to the audience of his abilities, so when it comes up later as a plot point it doesn’t feel strange.  It is also helped by the ventriloquist explaining the giants abilities, and also building up how evil and cruel he is.

After the giant discovers the intruders it’s Mickey’s turn to play the hero, initially starting with him trying to outsmart the giant and trick him into turning into a bug so they can swat him.  But when this fails and Donald and Goofy are locked up Mickey takes the lead again, getting the key from the giant and proceeding to escape.  The end of the story comes rapidly, as they cut down the beanstalk while the giant is climbing down, letting him fall to his doom.

The two shorts are quite enjoyable on their own.  The story of Bongo provides a look at shifting antagonist throughout the story, and also the framework of a very typical romantic story.  The Jack and the Beanstalk short provides some examples at shortcuts of characterization, by using established characters and by using songs and narrators to straight up tell you about a character.  While these aren’t always the best options, they are quick, and work well when you have limited time to tell the story.
Posted by Unknown at 10:58 PM No comments: