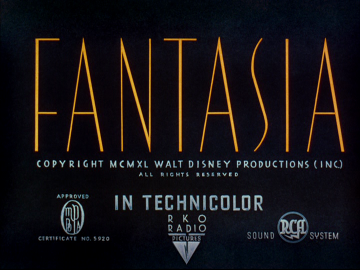 Fantasia is an unusual movie among the classic Disney animated features.  A blend of sound and image, rather than a narrative, it celebrates the parts of film that support the story, but not the story itself.  However, it is not completely devoid of plot.  The Sorcerer’s Apprentice short clearly tells a story, and throughout most of the shorts, there are characters and mini-stories.  The movie highlights this face, with the host explaining that there are three different kinds of music used; that with no plot implied or intended, that which doesn’t tell a inspires images, and that with a definite story intended.


Despite a lack of overall plot, there is still a recurring theme of order being brought out of chaos.  You this with the Wizard undoing the chaos of Mickey’s magic, the Earth forming out of the chaos of space, the Greek gods disrupting the chaotic revel of Bacchus, and at the end the songs of the righteous disrupting the demonic revelry on Bald Mountain.


The Sorcerer’s Apprentice section of Fantasia has the strongest plot in Fantasia, so I’ll begin by examining it.  The short begins by giving us a look at the two characters, and immediately setting up their situations.  The wizard does magic, and Mickey carries buckets of water.  As the wizard puts down his hat we see a residual glow around it, communicating to the audience that there’s at least some magic in the hat itself, so that when Mickey puts it on, we accept that he now has the magical abilities to animate a broom.  At first all seems well as Mickey uses his new abilities and the broom begins carrying water.  Mickey starts to play conductor, waving his hands as he commands the animate broom.  As he falls asleep, the conducting continues, but now takes a much grander form as he begins to manipulate the stars, the ocean and the sky, until he wakes up and realizes his scheme has gone awry and the room is now flooded.  This is a twist on the overall theme of order from chaos in Fantasia.  The untrained apprentice’s attempt at bringing order has backfired and resulted in chaos.  He tries to solve the problem, but just ends up making things worse.  Fortunately the wizard returns and brings the order, noticeably with hand gestures as well.


Throughout most of the shorts we see little short stories and bits of characterization.  For example in the Pastoral Symphony we see a short bit where a baby pegasus is learning to fly, he tries unsuccessful twice, before finally succeeding with a bit of help from his mom.  This mini-plot helps keep the audiences interest both here, and then when you see the family together later in the piece.  We also have the mini-story of the cupids getting pairing up the centaurs and centaurettes, in particular a lonely pair of blue ones.  This is another example of order being brought from chaos.  There are also the dancing mushrooms from the Nutcracker Suite, all of them are fairly interchangeable, but there’s one small mushroom that keeps falling out of step with the others.  While the scene would be beautiful with a perfectly executed dance, the imperfection from this little mushroom inspires something more, a bit of pathos from the audience that helps keep them drawn in and invested in what’s going on.  In the Dance of the Hours section, sight gags serve to hold audience interest, along with bits of characterization of the main dancers.


Overall, Fantasia is an interesting experiment.  It has some lovely visual and interesting thematic elements.  Though it doesn’t have a plot, it is an interesting study in the use of themes to tie together otherwise disparate elements.  This is something that can be useful even in stories with an overarching plot.  A moment of levity from a brief gag, or a short mini-plot can serve to help the main plot along, and reveal motives and attitudes of characters.
Posted by Unknown at 9:02 PM