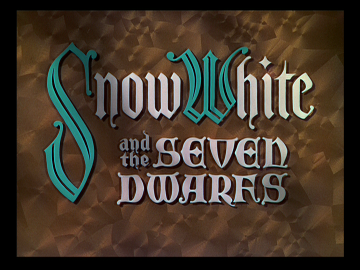 Snow White and the Seven Dwarfs, released by Disney Animation studios in 1937 is a fairly faithful retelling of Grimm fairy tale.  Like all adaptations though, it makes changes to present a better story for the film medium.  It is an old movie; most people that are reading this will likely live to see its 100th anniversary.  As such a relic it presents some cultural aspects that it helped create, and other that are now strange to us.  While it may not be a model of modern storytelling, there’s still a lot to learn from it.


Snow White and the Seven Dwarfs begins with the opening of a book, presenting who Snow White and the Queen are, their relationship, and the motives of the Queen.  This sort of opening exposition is most recognizable today from the Star Wars opening crawl, which itself was a reference to the same technique used in Flash Gordon serials.  These serials that were contemporary with Snow White.

There are two reasons to start the movie like this.  First, it acknowledges the source of this story as a well-known Fairy Tale.  And secondly, it’s cheaper than animating the backstory.  As it was, there were many sequences planned for the film that ended up being cut due to cost and complexity.  This technique is used again by Disney in other films, such as Sleeping Beauty.

This kind of rapid exposition can be seen as lazy.  It breaks the old mantras of “show, don’t tell” quite blatantly.  Poor examples of this technique can be seen in other films such as The Last Airbender.  At the other end of the spectrum, fans would be up in arms if Star Wars did not continue to use the opening crawl.  So while, it can be effective, it can also backfire if done poorly.


From there we get the plot moving quickly as we see the Queen consulting her Magic Mirror and finding out that Snow White has surpassed her own beauty.   This sets the rest of the plot in motion as the Queen immediately begins plotting the death of her step-daughter.

We are introduced to Snow White’s wearing rags and working as a scullery maid.  She wastes no time in beginning her “I Want” song.  The “I Want” song is a staple of musical theater, where the protagonist presents their goal to the audience in song.

I don’t intend for this to be about the differences between the original Grimm fairy tale story and the movie, but I think looking at the changes they made here is enlightening as to how they set up the plot.


In the Grimm version, there is no mention of Snow White wishing for her prince to come.  Though, that might have something to do with the fact that in the Grimm version Snow White was only 7 years old.  In the Disney version we jump right into this desire.  This is because the protagonist needs to want something, so the audience will cheer them on as they pursue that goal.
Normally this desire is followed by action by the protagonist, but Snow White is a very passive protagonist.   Her action toward this goal never extends beyond wishing for it.  Because of this, her character is very simple and flat, which is usually a sure way to get the audience to stop caring about the character.


In many ways the Queen is more a protagonist than Snow White.  She has a clear goal, be the fairest in the land, and then takes proactive action several times to make it happen.

After the woodsman’s attempt at murder, Snow White has a brief panicked freak-out as she runs away, only to be cheerfully singing and talking with animals immediately after.  She even goes so far as to apologize for making such a fuss.  While stuff like this can be off-putting to modern audiences.


In another interesting departure from the original story, Snow White finds the Dwarfs house terribly messy in the movie, while it’s described as immaculately clean in the Grimm version.  I suspect this change was to give Snow White a bit more to do, cleaning up the place, and being able to use present her skills as a bargaining chip for her to stay.  It also fits in with her having been a scullery maid in the castle, which is a nice connection.  However, the cleaning scene is still little more than filler.

Indeed you’ll find that there’s a lot of material with the dwarfs that doesn’t really have anything to do with the plot.   The washing scene and the dancing scene have little to do with the overall plot.  Even the parts that do tie into the plot more directly tend to be a bit longer than they really need to be.  What it does do is give us more time with the characters and connect with them.  So that when they grieve for Snow White later we feel it as well.  There was a lot of concern if the audience would be able to connect with cartoon characters at all, or if it would just come across as absurd.

One thing the movie does with the dwarfs if individuate them.  In the Grimm story they are never differentiated, or even named.   Dealing with so many characters can be tricky in general.  In the film they take several steps to handle it.  First, they keep each dwarf’s personality simple, and match their name to the personality.  They reinforce this by introducing each dwarf individually once Snow White wakes up, having her guess each one’s name and having them demonstrate what they’re like.

Of the dwarfs there’s three that stand out; Doc, the leader and generally the spokesperson for the group; Dopey, who basically serves as the comic relief character (though all the dwarfs certainly take this role in one way or another); and Grumpy, who keeps the dwarfs from becoming too much of an amorphous whole, and generally serving as a dissenting voice.  This is an important role as it keeps little conflicts going during the long middle portion of the movie where the dwarfs dominate to keep the viewer’s interest.

The character design of the dwarfs also serves an important purpose from a creator’s point of view in that they were more cartoony characters, which the animators were much more familiar with and knew that they could do.  The human characters were the big unknown in this film.  I find it interesting to note that in the first computer graphic film, Toy Story, there was similar concerns about being able to do humans well enough.  And while there were humans in Toy Story, they kept most of the focus on the stuff they did know they could animate, the toys.  The principle is basically the same here.

We do get a bit after the “Silly Song” where Snow White reiterates her desire for a Prince.  This helps keep the Prince and that storyline alive during this second act.   They had originally intended for the Prince to be more proactive in trying to find the princess, but it was cut out largely to the difficulty they had animating the prince.

I also find it interesting that the antidote to the “sleeping death” curse is not True Love, as you may expect, but actually “Love’s First Kiss.”  In the Grimm story there was nothing about love or kisses being the cure.  There was a prince that saved her, but it was more by dumb luck.  He was taking her glass casket back to his kingdom, and his servants stumbled, which knocked the poisonous bite of apple out of her mouth and allowed her to wake up.  Whereupon the Prince immediately professed her love, and they ran off to get married.  “True Love” goes on to find a place in many other Disney films, but it did not have its start here.

We get to see some progression with Grumpy the next morning where he’s seen liking a kiss from Snow White.  His arc is a simple one, but it does help lend some weight and humanity to the otherwise flat dwarf characters.


Meanwhile, the Queen has disguised herself and created a poison apple and she soon arrives at the cottage.  This leads to an example of the protagonist’s greatest weakness being their greatest strength taken too far.  Throughout the story Snow White’s innocence and naiveté has served her well, it stayed the hand of the Huntsman, it attracted the helpful forest critters, and it has won the dwarfs over to take her in.  I would even argue it is those traits that get the audience on her side as well, more than anything she’s actually done.  But now her compassion for what appears to be an old peddler woman is her undoing.  When presented with a wishing apple, her blind optimism works against her.  Ironically, from Snow White’s point of view, the apple was a wishing apple.  She made her wish, passed out, and woke up to the kiss of her prince.


In yet another departure from the original story, we now have the dwarfs involved in a chase scene with the queen.  This gives the final act a bit of excitement for the climax.  With the rewritten ending, it also keeps anyone from having to actually “do the deed” to off the queen.

After another cost saving big of textual filler we move on to the final scenes.  Basically a more elaborate form of the “One Year Later” text we might see in more modern movies.  The prince shows up after being absent for almost the entire movie.

Snow White and the Seven Dwarfs doesn’t follow all the rules of a modern story.  It keeps things simple and straightforward.  But the story and characters are too simplistic by most modern standards.  Despite that, we can still appreciate it for what it is, rather than burdening it with modern sensibilities.  It is historical work of art from a different time, like the art of the classical masters it is great not just for what it is, but for everything in our culture that it led to.  It exists now more as a frozen moment in time.  A historical moment carried forward by each generation.  Like the fairy tale that inspired it, it now serves as an inspiration, scaffolding on which current and future generations will tell their own stories.  Ultimately that’s what story is about, not rigidly repeating the tales of the past, but using them to explore our own current world.
Posted by Unknown at 8:47 PM