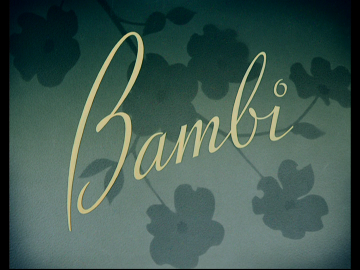 Released in 1942, Bambi is a coming of age story of a young deer.  It forgoes the usual plot structure in favor of telling a more personal narrative about the life of Bambi to create a more emotional connection with the audience.  The movie presents the audience with the Bambi shortly after his birth.  The audience is presented with their first look at Thumper here as he announces that the new prince is born.

While there is never any explicit statement by anyone in the movie, the fact that he is a prince gives an immediate understanding to the audience that he has a role to grow into.  This helps give the overall narrative a loose connection, since the audience on some level is watching to see if Bambi does indeed live up to his birthright.

The bulk of the movie is various scenes as Bambi grows up.  These scenes are important because they help the viewer sympathize with Bambi. He is seen doing things that everyone can relate to as part of growing up.  He makes new friends, plays and explores the world, experiences the loss of a loved one, and falls in love.  This last one is particularly important because we see Bambi for the first time taking charge of a situation.  Before he was a child, but now he’s an adult, and it’s up to him to deal with problems.

This takes on its ultimate form at the end of the movie, where a group of hunters arrive, and carelessly start a forest fire.  Bambi’s father warns Bambi, and tells him to follow him deep into the woods, but Bambi disobeys, not because he’s disobedient in general, but because he made a choice about what was important to do right then.  His choice is complicated when they end up going in separate directions.  The tension then builds through shots of the other wildlife trying to hide, culminating with a nervous pheasant bolting and getting shot, causing everyone else to scatter among a hail of gunfire.  Faline and Bambi continue to search for each other in all the confusion until a pack of dogs chases down Faline, cornering her on some rocks.  The dogs are wild, bestial, lacking any intelligences or compassion in their eyes.

Bambi, having just proven himself by fighting off the other deer, now fights off the pack of dogs to protect Faline.  He escapes as well, burying the dogs in an avalanche, but then is shot as he leaps a chasm.  The danger intensifies as flames creep out from the hunters campfire and engulf the surrounding forest.  Babmi’s father returns, demanding Bambi gets up despite the pain of his injury and he leads Bambi away to safety.

The movie now ends where it began, with Thumper waking up Friend owl with news of a new Prince being born.  And on our closing shot we have Bambi’s father leaving Bambi alone on the precipice overlooking the forest.  He has successful lived and overcome the trials to become the new prince of the forest.
The film of Bambi is a good example of presenting a character, less than telling a story.  This can be very effective in making an emotion connection for the viewer.  But it runs the risk of coming across as aimless or boring to some.   But when it works, it can connect more deeply with the audience.
Posted by Unknown at 9:30 PM