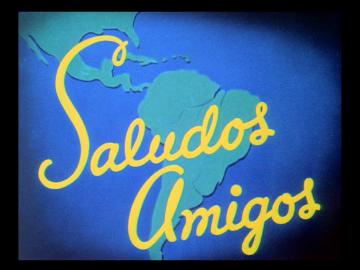 Disney‘s sixth animated film, Saludos Amigos, takes things in a different direction than their earlier work.  The primary reason for this was World War II.  The war had cut off many foreign markets for Disney and already resulted in the financial failure of Pinocchio.  South America, however, remained an open market free from the overseas conflict.  In addition, the State department also pushed Disney to do a film about South America to help strengthen ties with the United States, especially since some of the countries already had strong ties to Germany.  The result was Saludos Amigos.

This film is a series of short stories loosely tied together with live action scenes talking about the animators getting inspiration during their trip through South America for this movie.  There are four shorts: Lake Titicaca, Pedro, El Gaucho Goofy and Aquarela do Brasil.  Three of the shorts are primarily comedic and gag driven, so I’ll just give a brief overview of them before focusing on the more plot driven Pedro.

The first and third shorts are primarily comedic, with little in the way of plot.  The first short features Donald Duck as a tourist to Lake Titicaca and the third features Goofy learning how to be a Goucho.  This is an interesting short if you’ve ever wondered what exactly the mascot for the University of California, Santa Barbara was supposed to be.  But, again, light on any real plot.  The third section feels like something out of a samba based Fantasia, where we see a paintbrush painting the scenery and characters, interspersed with some gags with Donald and Jose Carioca.  Since none of these offers much in the way of the plot, I’m instead going to focus on the second short in this film.
The second short features a new character, Pedro, a young mail plane.  It’s a short coming of age story in which this young plane has to go on the dangerous mail route over the Andes Mountains to pick up and deliver the mail. It begins with a quick introduction to Pedro and his parents, then talks about Pedro going to ground school.  This bit seems trivial, but is important because it informs the viewer on what the mail route is like, and what kind of dangers there are.  They also introduce Mt. Aconcagua, the highest mountain in the Western Hemisphere, and present it as something of a villain.  When the pap and mama planes can’t make the trip, Pedro is recruited.  The danger is reinforced as his mother tells him to avoid downdrafts and his father tells him to avoid Mt. Aconcagua.  Shortly after, he’s on his way after a bumpy takeoff reinforces the idea that he’s not ready.  A brief run in with a downdraft helps the viewer see the kind of danger on the route, but also gives Pedro a quick recovery with little fuss.  From there things go well, though he does get a scare when he sees Mt. Aconcagua for the first time.  But he gets by without trouble and safely arrives in Mendoza to pick up the mail.

Everything is going well, which is reinforced by the narrator.  Pedro is then distracted by a buzzard that flies up into his face, and he chases the bird until he finds himself in front of Mt. Aconcagua.  He’s caught in a sudden storm and tossed wildly.  The mail sack gets knocked from him, and he makes a heroic dive to catch the bag again.  The narrator plays an active part throughout the story, but here in particular he urges Pedro to drop the mail and save himself, but he perseveres as she tries to climb back up through the snowstorm.  Things start to look out when they have the sudden reversal as he runs out of gas and falls back down into the darkness.  This cuts to his parents waiting for him to return, but it seems hopeless after him being gone so long.  He arrives safely with the mail, (which turns out to be an inconsequential postcard). Having successfully completed his first mail run despite the dangers also marks his coming of age.

Saludos Amigos remains one of the more obscure Disney features, and it’s easy to see why.  It was produced for a specific set of reasons that don’t apply so much today and fails to have the kind of cohesive story usually associated with Disney films.  It’s interesting, but ultimately lacks the attributes that make a film a true classic.
Posted by Unknown at 11:51 PM