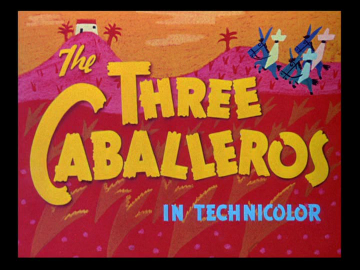 .
Like Saludos Amigos before it, The Three Caballeros focuses on Latin America.   It also uses a similar structure, with several shorts tied together by an overall concept.  This time the binding story is Donald Duck’s birthday and a box full of gifts from his friends south of the border.  Again, there’s not a lot of detailed storytelling going on here so I’ll be focusing on two of the early shorts.  At this point in the movie, they are framed as being part of a film reel Donald received in the large box and is now watching.

The first one is The Cold-Blooded Penguin.  The protagonist here is Pablo, a penguin is always too cold.  His goal to move to some warm tropical beach is quickly presented by the narrator.  He attempts the journey several times, but the cold is too much for him.  On one attempt he ends up getting frozen and his friends bring him back home and shower him with hot water in a tub.  This may seem minor, but establishing the tub inside his igloo is something that will become a plot point later.  He tries other unsuccessful schemes to keep warm until finally creating a boat out of ice with his igloo (including stove).  From here there’s a sequence of him traveling along the South American coast on his way north with the narrator pointing out various locations along the way.  This sequence is mostly gags and the show creators showing off their knowledge of South America.  Once he passes the equator his ice raft start to rapidly melt.  Pablo ends up taking refuge in the bathtub, allowing him to reach the remote tropical island he’s been looking for.  And the short closes with him sweating profusely in the heat and looking longingly at some picture of the South Pole.

The next short I’ll examine is The Flying Gauchito.  This short has an old goucho narrating a story from his youth.   It begins with the young gouchito heading out early in the morning to hunt.  But instead of a condor, he comes across a winged donkey.  After taming the beast he decides he wants to race him to earn “thousands of pesos”.   So here we are introduced to the narrator’s goal at the time, which pushes the action forward for the rest of the short.  He enters a race with the donkey, now named Burrito, and despite the jeers of the other racers at the start, wins the race with the surreptitious use of Burrito wings.  However the ruse is discovered just before he receives his winnings and the short ends with him flying off into the sky saying they were never heard from again.

From here, the remainder of the show is an often surreal series of songs and gags.  While amusing, are light on actual plot.  It also feels throughout that the film makers really wanted to show off everything they had learned about Latin America, and at times the show feels like it’s trying to educate as much as entertain.  While a noble goal, it often comes across at the expense of bogging down the plot, where there is one.
Posted by Unknown at 10:42 PM