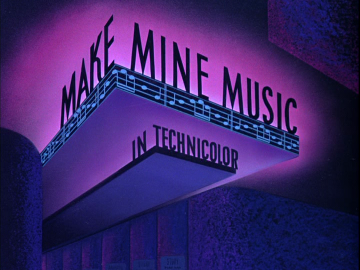 Disney continued with anthology movies amid continuing production issues related to World War II, releasing with Make Mine Music in 1946.  There were originally 10 shorts included in the film.  However, one of them, The Martins and the Coys, was not included as part of the DVD release, primarily due to concerns over the amount of gunplay in it.  Again, many of the shorts are more musical and abstract without any real plot.  There are a few standouts though, such as Casey at the Bat, All the Cats Join In, Peter and the Wolf, and Johnnie Fedora and Alice Blue Bonnet.  But for this article I’ll be focusing on the final short of the film; The Whale Who Wanted to Sing at the Met.

Despite the absurd sounding title of, The Whale Who Wanted to Sing at the Met is actually about a tragedy of misunderstanding.  The story does not begin with showing titular whale directly.  But instead presents a series of stories in the newspaper about mysterious singing at sea that attracts more and more attention.  This build-up is there to lead into the introduction of the antagonist of this story, Tetti-Tatti, and impresario who hears about these operatic songs coming from a whale.  He concludes incorrectly that the whale has swallowed an opera singer and heads out on an expedition to save them.

At this point the short shifts to the protagonist, Willie the whale, out in the ocean singing to seals.  While Willie doesn’t directly express his goal to sing at the Met, the narrator and Willie’s actions make his goal to sing professionally clear by presenting this as an opportunity for the two to meet.  When Willie finds out about it from his seagull friend he immediately heads out to intercept the ship.  So the short has now established the protagonist, antagonist, and set them up on a collision course.

When Willie finds the ship, Tetti-Tatti is still under the impression that Willie has swallowed an opera singer and orders his crew to harpoon the whale.  But the crew rather listen to Willie’s singing.  Tetti-Tatti continues to insist they save the opera singer, but is repeatedly stopped by the crew.  The narrator then reveals that Willie, abilities are even greater than was already known.  He has the ability to sing in three different voices at the same time. While in stories it’s good for protagonist to have flaws they overcome, it’s also important for them to have things that they are good at as well. This ability is a version of that, but it also sets Willie up as even more amazing than was originally thought, making his ultimate destruction even more tragic.  Tetti-Tatti’s misunderstand and resolve only grow with this revelation however, as he hears the addition voices from Willie he concludes that the whale has swallowed additional opera singers.
The story then does something very deceptive here.  The narrator chides Tetti-Tatti for not seeing Willie for what he was, and continues with the narrator saying “Just imagine a whale singing opera on the very stage of the Met.”  The scene then fades from Willie singing in the ocean to him singing on stage, with Tetti-Tatti conducting.  This is followed by additional scenes and newspaper headlines showing his great successes everywhere. Finally we see Willie singing as the devilish Mephistopheles which then fades to Tetti-Tatti once again back on the ship, manning the harpoon, revealing to the audience that what they had just seen wasn’t real.  He fires and jubilantly exclaims that he got him.  The previous sequence was presented as imaginary from the start, but it’s easy for the audience to overlook that, and think that the scenes are Willie’s dream coming true.  The subtle setup leads to a sudden return to reality can be jarring and effective.  But it depends heavily on external expectations of the audience.  That cartoons have happy endings.  That a whale can become an opera singer.  These are assumptions that can then be turned on their head by clever presentation.

As Willie thrashes away among a stormy sea and an angry red sky, it leaves no question as to Willies fate.  The narrator does put a positive spin on it as it shows Willie singing up in Heaven, forever and ever.

I found this short in particularly interesting because it’s so complete and nuanced for such a short story.  The antagonist isn’t an evil person.  Tetti-Tatti was trying to save lives he thought were in danger (though it was so he could then promote them as opera singers).  But his narrow-minded approach made him blind to the greater talent right in front of him, but in unusual form.   And then the short plays off the expectations of the audience to give them a false happy ending before delivering the sudden reversal into tragedy.

For other writers I think there are two main lessons here.  Antagonist don’t have to be evil, they just have to have goals that interfere with the protagonist’s goals.  And secondly, it can be very effective to play on the expectations of the audience, and then subvert them.
Posted by Unknown at 12:34 AM