Extradiagetic: The Adventures of Ichabod and Mr. Toad 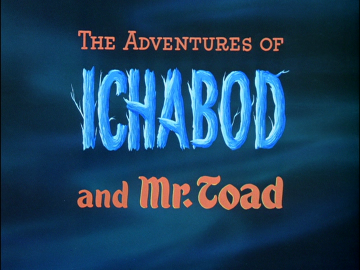 At last, the end of the Disney package films.  The Adventures of Ichabod and Mr. Toad, released in 1949, marks the end of the wartime packaged films era.  These shorts are based on the Legend of Sleepy Hollow and The Wind in the Willows.   In an unusual choice for Disney, the protagonists in both shorts deeply flawed characters with little redeeming value.  The story of Mr. Toad gets away with it, by telling an interesting story about an interesting character.   Ichabod however, is set up intentionally to be unlikable, so that his ultimate fate is not so unpalatable.

Mr. Toad is a rich reckless playboy who follows whatever whim gets into his head, totally lacking of any self-control or restraint.  Despite that, the story still creates sympathy for him, by having Mr. Winkie maliciously lie to the court.  Reckless or not, the audience understands that Mr. Toad was wrongfully imprisoned, and lets them get behind his later escape.  It also justifies his desire to get the Toad Hall deed back, despite earlier being happy to trade it for an automobile.  It’s now a matter of seeing the true villain get their due.  Because of this the audience is willing to follow along on the adventure, despite Mr. Toad giving little reason to root for him.  And while he says the experience has changed him, ultimately it is not surprising when he lapses at the end.

This complete lack of character development in Mr. Toad is tolerated, and even embraced, by the audience because he represents the unrestrained id.  He is there to do what the audience is too sensible to do themselves.  It offers the opportunity to briefly live vicariously as the reckless Mr. Toad, and experience that rambunctious freedom.  The narrator highlights this at the end, suggesting the audience envies him a bit.  Mr. Toad provides a safe way to explore our own desires to indulge ourselves not care about the consequences.

Ichabod Crane presents an entirely different approach to the virtue-less character.  One in which the lack of sympathy is very deliberate. Ichabod is gluttonous, manipulative, greedy and cowardly.  His rival, set up as the antagonist is not perfect, but possess more virtues than Ichabod.  He’s boisterous, and prone to pranks, but not truly malicious, he’s even described as the local hero.  Even the love interest, Katrina seems perfectly happy pitting suitors against each other for her own gain.  These other characters are set up this way to make Ichabod not seem quite so bad in comparison, and allow the audience to maintain some impression that he’s still the hero.

Ultimately there is no great villain in the story.   Even the headless horseman is less a villain than a force of nature, mysterious and unavoidable.   Something that can only be escaped, not fought.  In a more traditional story he might survive the encounter, and change his ways because of it.  Similar to Scrooge, in A Christmas Carol.  If this was a love story, his interest in Katrina might prompt him to better himself.  Instead they make it clear that he’s just as interested in getting her father’s farm and all the money it would produce.

Despite all the time spent with the rivalry between Brom Bones and Ichabod, this isn’t a romantic comedy, or even really a ghost story in the end.  It is a morality play.  When the Headless Horseman comes, he comes not for a good man, but for one deeply flawed.  It is a cautionary tale, warning of the dangers of following in Ichabod’s character flaws.

There are many types of protagonists in stories.  And the standard convention is for them to be heroic, and have depth and character growth.  But it’s possible to tell compelling stories without either of those things.  But they have to be supported by the right structure in the story, or the audience will quickly loose interest in an unlikable character.
Posted by Unknown at 9:09 PM