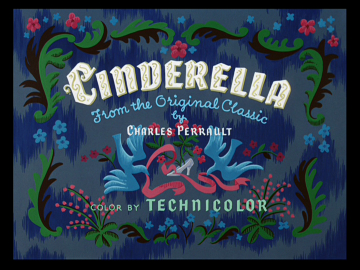 For any story, it’s important to quickly establish the boundaries of your story.   The first few scenes should set the tone, and inform the audience what sort of things are and are not possible.  People bursting into song, talking animals, magic; these are all things that audiences are willing to suspend their disbelief for, but not if they’re suddenly presented halfway through the movie.  Disney’s return to full length animated movies with Cinderella has a lot to set up, and it does it very smoothly and quickly.

Cinderella begins like Snow White, with a literal storybook opening.  A brief narration establishes Cinderella’s backstory.  As is typical of Disney princesses of the era, she possesses nearly unlimited optimism and is a friend to all living things.  The opening scene is easy to overlook, but it conveys a lot of information about the movie very quickly.  As the movie begins we see she lives at the top of a tower, both separated from, and above the rest of her family.   The view moves into her room, sparsely decorated with secondhand and broken furniture.  Patches spot her bed sheets.  These visual cues set up her current position as a servant in her own home.  It speaks to the attitudes of the Stepmother, only allowing Cinderella to use what has already been thrown away by them.

Next, Cinderella is woken by a pair of birds.  They don’t speak, but they are wearing bits of clothing.  This in addition to their actions establishes that the animals are intelligent.  A fact quickly reinforced as we see many other animals acting with greater than natural intelligence, including the mice who can even speak.  Once awake, Cinderella quickly moves into singing “A Dream Is a Wish Your Heart Makes”, thus marking this as a musical movie, where people break into song.

Within five minutes of the film opening (including credits) the audience is set up to expect a fairy tale musical in which animals are intelligent and songs are commonplace.  This is clearly not the reality of our world, but because these facts are established so early on the audience has no problem believing these things for the rest of the movie.  This sets the tone for the rest of the movie, and gives the viewer a frame of reference for what is and is not possible.

Much like Snow White before her, much of Cinderella’s strength is in her ability to make friends.  Her freeing Gus from a trap then clothing and naming him demonstrates her kindness and her ability to make friends with even those others would ignore at best, and consider pests at worst.  This friendship with the animals pays off throughout the movie, but especially at the end where they free Cinderella just in time. While Cinderella might not seem active, it was her actions early on that set her up to succeed later when she’s otherwise powerless.

Gus also provides the role of outsider, giving the other characters an excuse to explains things to audience.  This role is very common in stories and is often filled by the protagonist, when they are suddenly thrust into a new situation by the plot.  Since Cinderella is already in an established situation, not having a character to explain things to could result in characters speaking to each other in unnecessary detail about things they already know. This logical inconstancy that can take the viewer out of the native.

When Cinderella goes down to the kitchen she finds Bruno, the dog, dreaming of chasing Lucifer, the cat.  After singing about how great dreams are, she now chides Bruno for his dreams and tells him that his dream is bad.  This is an ironic mirror of her own situation, as her dreams are suppressed by the Stepmother, so she is doing the same thing to Bruno.  But, ultimately it is Bruno following his dream and chasing Lucifer that literally frees Cinderella to follow her own.

The magic of the fairy godmother is a sudden shift in what is an otherwise non-magical world.  Presenting magic this late in a story can be problematic, but Cinderella has a few things helping it out.  First of all, it’s not unreasonable to expect the audience to familiar with the genre of fairy tales.  And magical intervention is a common occurrence in them.  Additionally the characters themselves treat the magic as something unusual and exceptional.   Because it’s novel to them, it’s okay for it to be novel for the audience as well.  The audience doesn’t feel like they should’ve known like something like this was possible.

How to start a story is an important consideration, with many factors to balance.  Cinderella is an excellent example of how to quickly give the audience an understanding of what sort of story to expect.  When someone comes into a story for the first time, they come in willing to accept things that would otherwise be illogical.  This brief openness allows the writer to create fantastic worlds.  But this period of acceptance is quick to close.  An early foothold is necessary for people to take a story seriously.    Without that solid foundation, you risk losing the reader later.
Posted by Unknown at 9:22 PM