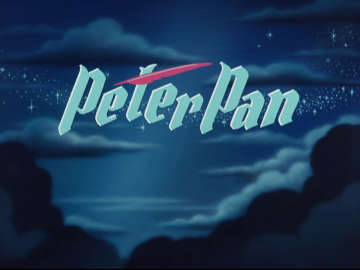 Peter Pan is Disney’s fourteenth animated feature and a big success after the under-performing Alice in Wonderland.  While the film carries the name of Peter Pan, the movie is really more about Wendy.   The story begins and ends with her, and her arc is the most prominent one.  The other children never want to grow up, and she doesn’t either, at least at the beginning.  By the end she’s come around and realized it’s time to move on.  The movie doesn’t dwell on this story arc, instead preferring to focus attention on the exploits of Peter Pan himself.  But it remains the primary arc for the story, and makes Wendy more of a protagonist than Peter Pan.

Wendy’s story arc begins as the narrator introduces the Darling family.  She is devout believer in Peter Pan and tells stories to her brother’s about his exploits.  When her father declares that it’s time she grow up and move out of the nursery Wendy wants to have nothing to do with it.

That evening Peter Pan shows up looking for his shadow and meet Wendy in person for the first time.  She excitedly agrees to join Peter Pan in Never Land when the opportunity arises, though she does hesitate to consider what her mother would say.  This prompts Peter Pan to ask what a mother is.  She begins to explain it as someone who loves and cares for you and tells stories.  As soon as she mentions telling stories Peter Pan declares that Wendy can be his Mother.  This suggestion begins a repeated theme of Wendy taking on the role of the adult with Peter Pan and the other boys.  In attempting to escape adulthood she finds herself naturally falling into the role.

The rest of the children are awoken by the commotion and they all travel to Never Land together.  After a few small adventures they all return to Peter Pan’s hideout where Wendy falls into the adult role she had hoped to avoid, telling John and Michael to clean up and get ready for bed.  She begins to sing a song to the boys about what a mother is, prompting them to attempt to return immediately. As they leave they are waylaid by pirates and take to their ship while Captain Hook leaves a bomb for Peter Pan

On the pirate ship Captain Hook offers them all the dubious choice of joining his crew or walking the plank.  When all the boys rush to join up Wendy again takes the role of adult, halting them with a word and the clap of her hands.  She chides them much like an adult and refused to join Captain Hook’s crew.  She stoically walks the plank and is rescued by Peter Pan.  After quick battle they return to London.  The parents return home, her father with his attitudes switched.  George now decides his earlier edict that she leaves the nursery was too rash, but is taken by surprise when Wendy announces to them that she’s ready to grow up.

In her attempt to escape her future, Wendy ended up walking the same path naturally.  She realized from her experience that she was already more grown up than she realized.  This isn’t to say there isn’t some character development elsewhere.  Notably, after the explosion and near death of Tinker Bell, Peter Pan goes from sulking that Wendy is leaving, to escorting her back to London himself on a flying pirate ship.  But the main story of Peter Pan really is Wendy coming to terms with growing up.
Posted by Unknown at 8:26 PM